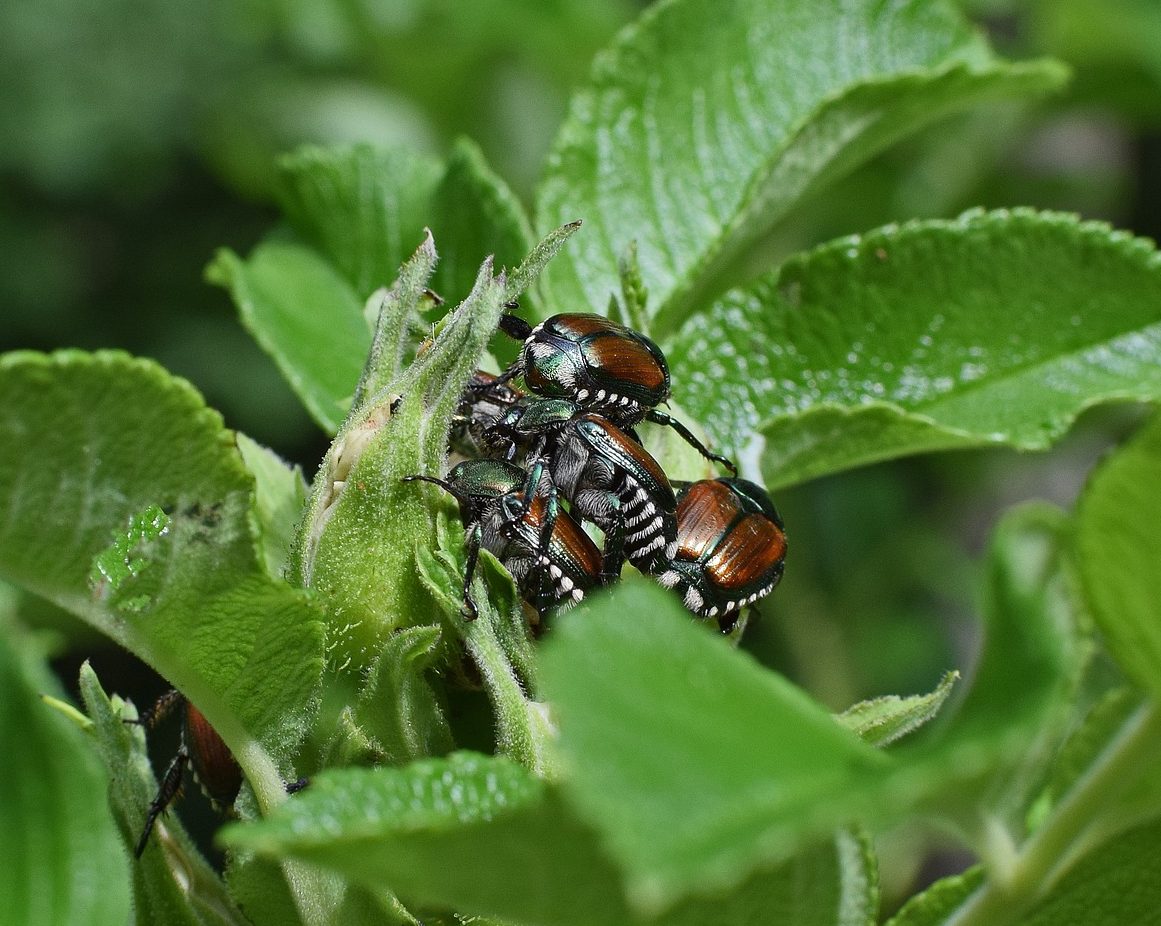 WHAT TO LOOK FOR

The Japanese Beetle has iridescent green-bronze wings with six small tufts of white hairs on each side and it’s about the size of your small fingernail. Leaf eaten by Japanese Beetles and looks like lace.

They are serious pests in both the adult beetle and the larval grub stages. Adult beetles have a plant preferences but may eat other plants in your garden. They are above ground, feeding, mating and laying eggs from mid-June to early August. The white ‘C’ shaped grubs spend most of the rest of the growing season eating the roots under your lawn, resulting in brown patches that increase in size with time. Fortunately, there is only one brood each year.

If you do notice Japanese Beetle damage, healthy, mature trees and shrubs can survive a lot of feedings. Focusing your efforts on immature, weak, or damaged plants, as well as fruits, vegetables and herbs. These plants can tolerate some leaf feeding, but severe damage may affect plant growth and reduce yield.

C-shaped, white to cream-colored grubs with a distinct tan-colored head. Will be 1/8th inch up to an inch long. Japanese beetle grubs look like other white grubs and can be distinguished by the hairs on the end of their body. 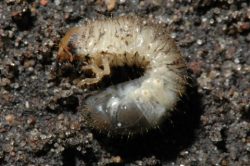 Steps to reduce there numbers and minimize damage:

Right when you start seeing Japanese Beetle damage is when you need to start managing their populations. They can be feeding up to 8 weeks and they are attracted to the scent of other Japanese Beetles and already eaten and damaged leaves.

Incorporate plants around your favorite landscape and garden plants that repel Japanese beetles such as catnip, chives, garlic, odorless marigold, nasturtium, and white geranium. See the list of plants below to avoid if you want to reduce your Japanese Beetle population.

Natural predators to the beetle are birds, spiders, and possibly raccoons, moles, and skunks. The Starling bird being the greatest predator. If you create a yard that attracts birds it may be a good first step to keeping some of the population down.

Continually harvest your fruits and vegetables when they are ripe to reduce the feeding from the beetles.

Browse your garden daily, focusing on the plants they are attracted to or the ones you want to minimize damage. Hold a small bucket of strong soapy water under the beetle and tap or shake the critter into it. You may have to grab them instead if they are flying away on you. They naturally fall to the ground as a defense but easily get lost in the dirt. You will need to be diligent about this, visiting your plants as often as possible and inspecting carefully. Do not squish them! They are attracted to the scent of their own kind.

If a tree or shrub is no longer in bloom, you can use a fine mesh barrier to cover the plant. If the plant is blooming and needs to be pollinated, hand-picking is going to be the only option. You don’t want to spray insecticides on your plant at that time.

*Warning* Traps are not recommended by us or the UMN Extension, nor do we usually sell them. If you can place traps far away from gardens and landscape plants, this can help populations migrate away from valuable landscape plants but they can fly 10-15 miles to a new place to feed and you may just be attracting them to your area. Do not place the traps near your favorite trees and garden. The USDA recommends putting them at the border of your property and throughout the community.

To focus on killing the grubs, you have to start treating in early July once you start to see the adult beetles. As the grubs get bigger, it is harder to kill them. Killing grubs under the lawn this summer will not affect the number of beetles this year, but next year the number of beetles that emerge from your lawn should be reduced. Killing grubs will reduce damage to your turf but adjacent properties may still have Japanese Beetles so you may not see reduction of adult beetles.

Bacillus thuringiensis galleriae is another natural way to kill the grubs.  Bt is a naturally occurring soil bacteria that eats Japanese Beetle grubs before they can develop into beetles. It can last up to one to two weeks and it is not harmful to bees.

Milky Spore is a biological agent that is specific to Japanese Beetle grubs and will not harm other grubs. It also does not harm earthworms, and other insects such as bees and butterflies, pets, humans or other animals. It does need one or more applications annually for three to five years to adequately inoculate your lawn, but once appropriate levels are in place, no further treatment is needed for 10 years.

It’s the law to read and use insecticide according to the label and apply only as recommended. Make sure that it can be used around the plants you wish to treat and for the insects you want to control.

A granular or liquid Systemic Insecticide containing Imidacloprid and dinotefuran, both neonicotinoids, can be applied to lawn one time per year. This seems like an easy way to minimize damage but these are highly toxic to all pollinators. The plant roots absorb the insecticide and will poison the beetles and any insects that munch on the plant. Apply when the plant is not in bloom to prevent pollinator death and 4-5 feet away from flowering plants.

Topical insecticides, like Eight, which contains Permethrin (high toxicity to fish and bees), can be sprayed on vegetables, fruits, flowers, nuts, lawns, and outside surfaces of buildings. Neem oil is an organic and less toxic insecticide that is an alternative. If you are spraying edible plants, be sure the product is labeled for those plants. Be aware, however, that these are ‘broad-spectrum’ insecticides that affect many kind of insects, including bees and butterflies, so use them cautiously, applying only when and where needed. Keep these insecticides away from ponds and streams as well.

There are insecticides that can only be applied by professionals, like chlorantraniliprole, that are have a lower risk to harm other insects and are longer lasting.

Here is another great resource from the USDA on Japanese Beetles, their life cycle, plants that are not susceptible to damage and ones that are, and much more! USDA Japanese Beetle Handbook (pdf)

Please let us know your questions or if you need help fighting off these buggers! We may not be able to completely eradicate them but keeping their numbers down will help all gardeners!